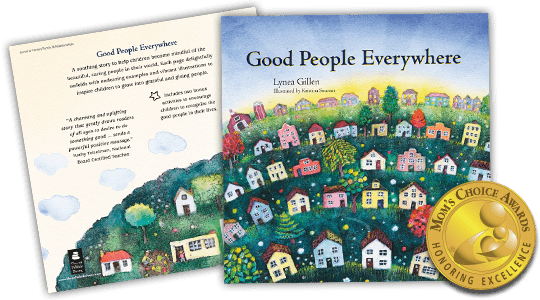 It’s hard to believe that it’s already been 10 years since Lynea’s Good People Everywhere went into print! In fact, we almost missed its anniversary, only realizing it as we finalized its 13th printing the other day.

Almost 30,000 copies of this soothing story are already in print, inspiring numerous YouTube read-alouds like this one:

But the history of Good People Everywhere goes back further than just the 10 years it’s been in print. In fact, we shared an early iteration of the story back in 2008, not long after we launched our blog. In light of the book’s anniversary, it seemed worth sharing again – not only because it features that earlier version but because it shows how Lynea first used it in her work with children, helping them recognize all the good that persists in the world.

Frankly, it’s a message we all perhaps need to be reminded of more than ever! Here’s that original post:

In a recent group at school, a young boy came in and reported to us all that a friend of his had committed suicide the week before. The other students had lots of questions – How? Why? – and the feelings of fear and loss that come up when someone takes their own life. The boy really needed to talk, and the other students were very supportive of his emotion.

Because it was such a heavy topic, I wanted to turn the focus to something more positive before sending the children back out into the world.  So I gave them each a Community Circle worksheet and encouraged them to fill it with all the people in their world who help them when they are having a hard time.

Someone asked if it was okay to put people on it who had died.  I said, “Absolutely. We still hold them in our hearts, and they are still a part of our community.”  The boy wrote his friend’s name in his circle.

The children created beautiful depictions of the people in their lives who were “there” for them, then shared their creations. The boy who had lost his friend stated that he was going to need strength to get through this time. He said he was glad that there were so many people in his life to help him.

I encouraged them to look for the good stories in the world.  We ended with the poem “Good People Everywhere.”

Today, all over the world, millions and millions of people are doing good things.

Jessica’s mom is in a big kitchen making food for people who don’t have homes.
Hunter’s dad is building a bridge that will help people cross a very big river.
Emily, Lois and Jimmy’s  Uncle Joe works hard at preparing a meal for the family.

Stewart and Lauren’s brother Joshua is in the armed forces, helping keep everyone safe,
And Zoe’s dad is in his doctor’s office, helping others get well.

Today, in a land across the sea, Veronica’s mom plants food,
Josef and his dad pick fruit,
And Robbie’s dad drives a truck full of oranges to the grocery store
So you can have a ripe, juicy orange in your lunch.

Today, Mrs. Higgins teaches math and spelling to her 2nd grade class,
And Frank Sollivan plays some lively fiddle music to bring joy to his family and friends.
Today, Devin’s father repairs homes that have been damaged by floods,
And Sarah’s mom helps build a home for a new family.

Today, Jeremiah is trying his very best to get an A on his science test.
A first grade boy helps a friend who has a skinned knee.
A big sister holds her baby brother while her mother runs across the street to bring two eggs to the neighbor who is baking brownies.

Today, millions and millions of people will do very good things,
And so will you.  I wonder what they will be?

Good People Everywhere is available from our store, as well as Powell’s and Amazon.

The Beauty (& Importance) of Talking with Strangers