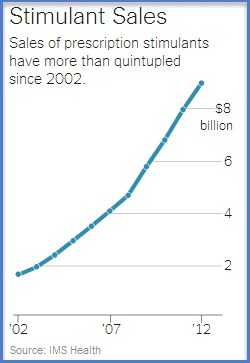 Judge by rising rates of ADHD diagnoses and medication prescriptions (quintupling over the past 12 years), it would seem that we’ve really got a national epidemic at hand.

The rise of A.D.H.D. diagnoses and prescriptions for stimulants over the years coincided with a remarkably successful two-decade campaign by pharmaceutical companies to publicize the syndrome and promote the pills to doctors, educators and parents….

Behind that growth has been drug company marketing that has stretched the image of classic A.D.H.D. to include relatively normal behavior like carelessness and impatience, and has often overstated the pills’ benefits. Advertising on television and in popular magazines like People and Good Housekeeping has cast common childhood forgetfulness and poor grades as grounds for medication that, among other benefits, can result in “schoolwork that matches his intelligence” and ease family tension.

A 2002 ad for Adderall showed a mother playing with her son and saying, “Thanks for taking out the garbage.”

So maybe it’s no surprise that stimulant prescriptions for children skyrocketed from 600,000 in 1990 to 3.5 million today. ADHD “is the second most frequent long-term diagnosis made in children, narrowly trailing asthma.” The creator of one of the most used tests for ADHD has described these prescription trends as “a national disaster of dangerous proportions.” 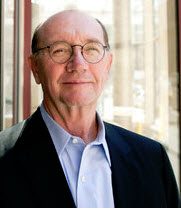 Even Roger Griggs, the pharmaceutical executive who introduced Adderall in 1994, said he strongly opposes marketing stimulants to the general public because of their dangers. He calls them “nuclear bombs,” warranted only under extreme circumstances and when carefully overseen by a physician.”

These experts advise that stimulants are for classic ADHD – a legitimate disability that impedes success at school, work and in personal life. Historically, an estimated 5% of children have classic ADHD.

Still, it’s worth looking at what else we can do for them, as well as those who just have trouble sustaining and shifting attention or controlling their impulses (a more typical child development issue).

In our course ADHD: The Mind-Body Connection, Dr. Jeff Sosne notes that our home and school environments can actually set the stage for behavior that looks like ADHD but isn’t.

For instance, consider the demands for attention made on children in overly structured lives. There’s increased academic pressure and heavy homework loads, even at the K-5 level. There may be afterschool obligations such as sports, music, tutoring, church and service groups, or lessons of some sort. While such activities may be pursued for personal pleasure or enrichment, they’re just as often used to sweeten a youth’s “resume” for later schooling.

The resulting stress easily leads to distracted or “wild” behavior, as children find it harder and harder to conform to such demands.

Much can be accomplished through making sure the child eats right, gets enough exercise and adequate sleep, and has opportunities for unstructured play.

According to Dr. Sosne, we see a big reduction of symptoms when these basic human needs are met – whether the child actually has ADHD or not. Children become more able to learn practices that can help them improve their ability to focus, pay attention and self-regulate. These, in turn, support ongoing healthy habits, for through them, kids are nurtured into mindfulness, including awareness of their bodies and what their bodies are telling them.

Practicing and developing eye contact, listening and waiting skills are a few of the 10 key strategies Dr. Sosne teaches parents and children through the recreational therapy classes at his clinic and in his PSU course for teachers and therapists.

Here’s an example of one such activity, an extra from our Kids Teach Yoga: Flying Eagle DVD:

Substantial research has shown that “symptoms” of ADHD-inattention and impulsivity-are reduced after exposure to natural views and settings (Kuo & Faber Taylor, 2004).

According to Kaplan, natural environments assist in recovery from attention fatigue, in part because they engage the mind effortlessly, providing a respite from having to deliberately direct attention. Thus, the sense of rejuvenation commonly experienced after spending time in natural settings may in part reflect a systematic restorative effect on directed attention.

Yoga Calm’s co-founder, Jim Gillen, observed this same response in the 1990s when working with at-risk and “ADHD youth” in the collection of environmental data as part of his National Science Foundation program: “Our youth data gatherers consistently showed fewer of the attention problems in natural areas than where reported in the classroom.”

Jim’s observations, along with Lynea’s Outdoor School experience and Leah Schuyler’s eco-psychology background, led to the development of their Yoga Calm environmental education curriculum. You can learn this curriculum and its unique interdisciplinary approach in their April 12-13, Love, Knowledge and Action course.

9 Ways to Teach & Nurture Focus for Kids with ADHD