How Mindfulness Can Help Your Kids Thrive 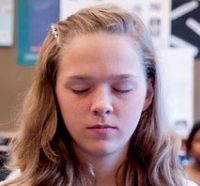 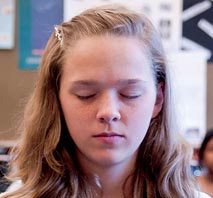 It’s a big developmental step when a child begins to realize that they can control their thoughts and feelings. They begin to understand how what we think affects how we feel and what we do.

This is a skill I’ve consistently aimed to nurture through my decades of work as an elementary school counselor, through games and activities, as well as plain conversation with students.

One activity I developed to encourage children into thoughtful reflection and self-awareness is Mindful Moments – a set of cards I created with short contemplations such as Remember a time when a friend listened to you. Who was that friend? How did that make you feel? or Remember a time when you felt very strong in your body. What were you doing? Who was there?

Recently, a teacher I know had her class make their own mindful moment cards as a writing assignment. At the end of the year, each student got a set of cards to take with them in a lovely little bag. Here’s a card one fifth grade student wrote:

Think about the people in your community that support you. Take the time to talk to them or give them a compliment to show them you care.

Imagine yourself having a small sunflower at your feet. Soon, that sunflower has spread into a bright bubble around you. First, the bubble spreads to your classmates, then to all of their families and soon, to your whole community. Then city, state, country. Soon the whole world is circled in this protective orange bubble. Everybody is cheerful and grounded.

The Needs of a Stressed Generation

Creating such peaceful, positive thoughts and reminders of the goodness in their lives can be a powerful antidote to the increasing amount of stress kids are carrying these days.

And they are carrying a lot. According to the American Psychological Association, 31% of teens say they feel overwhelmed by stress, and 42% say they aren’t doing enough about it (or aren’t sure they are). In fact, more teens than adults report being chronically stressed these days – even as research suggests one reason for their increasing stress levels is the stress of adults around them.

Other reasons recently cited include over-scheduling and social media.

And if teens are feeling pressured and having trouble coping, how are our younger kids faring? The short answer: Not well. According to data from the Child Mind Institute, almost half of American youth will have a diagnosable mental illness at some point before they turn 18, with anxiety disorders being the most common. The median age of onset? Six. 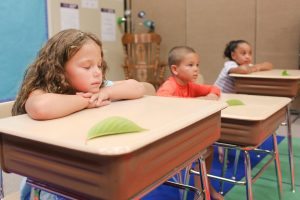 Mindfulness does much more than give kids a set of skills and strategies to counterbalance the stress and maintain emotional control. Research conducted over the past few years have shown that it supports academic achievement, as well – as one component of what’s known in education circles as social emotional learning, or SEL.

For instance, one analysis of previous research

Another study noted an “11-percentile-point gain in achievement” among kids who participated in SEL. They also showed better social skills, emotional skills, attitudes, and behavior.

This is why more schools around the country are incorporating mindfulness programs. Here in Oregon, several high schools have already begun to offer a semester-long, for-credit mindfulness course that’s proved popular with students, parents, and educators alike! More than ever, teachers are coming to really value the power of mindfulness in their student’s lives – as well as their own.

Not offered at your child’s school? Or perhaps you home school? There are both in-person and online mindfulness courses you can take to learn approaches to nurturing mindfulness in your child. You may even find some ideas for managing stress in your own life, as well!

Bringing Mindfulness to the Classroom

How to Bring Yoga & Mindfulness to Your Classroom

What Are We Asking When We Ask Kids to Pay Attention?

Teaching Yoga to Kids: Why the Teacher’s Emotions Matter