Movement for Kids, Mindfulness for Teachers? 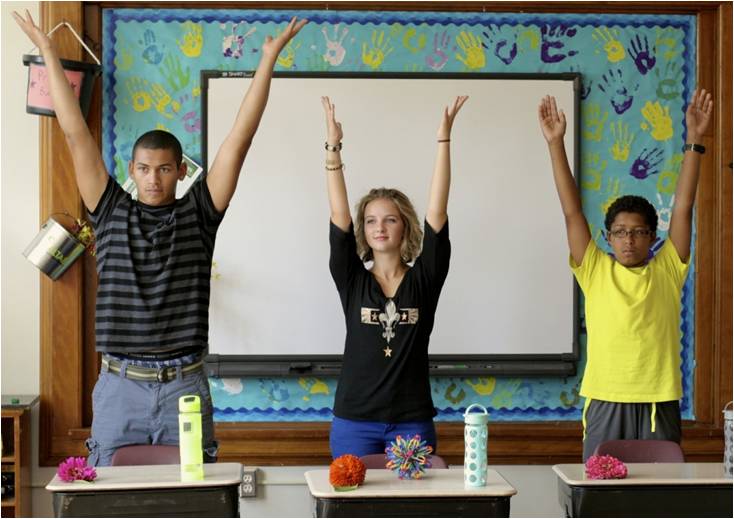 This very large, UK-based research project involved more than 28,000 students between the ages of 11 and 14, 100 schools, and 650 teachers. Twenty million data points were collected. The goal was to see if universal school-based mindfulness training could improve students’ mental health.

The results, in fact, said no, the training didn’t have much impact at all – and could even be harmful for students with existing or developing mental health issues.

But, as is typically the case, a lot of nuance was lost in how those results were presented through the media.

For one, some students actually did benefit from mindfulness: those who also practiced it at home, as they were instructed to do. The problem was that most students didn’t. As one of the study authors, Prof. Mark Williams of Oxford, told the Guardian,

“On average they only practised once over 10 weeks of the course. And that’s like going to the gym once and hoping you’ll get fit. But why didn’t they practise? Well, because many of them found it boring.”

He went on: “If today’s young people are to be enthused enough to practise mindfulness, then updating training to suit different needs and giving them a say in the approach they prefer are the vital next steps.”

Indeed, the research team suggested a number of things that could influence the effectiveness of school-based mindfulness programs, including format, curriculum focus, pedagogical approach, and teaching method. 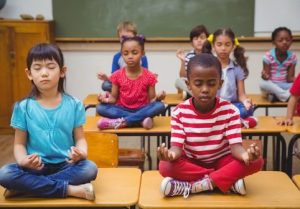 Typically, school-based mindfulness “involves teachers learning mindfulness themselves, followed by training in how to deliver MT [mindfulness training] to students, before going on to deliver MT to students,” as the authors of one of the UK studies put it. “MT involves learning attentional control, and emotional and social regulation that can enhance resilience in the face of stressors, and promote mental health.”

The activities taught tend to be cognitively based, perhaps with some deep breathing in addition to various mental exercises and activities such as feelings journals and focusing on the senses.

But as we’ve noted before, in the yoga tradition, meditative practices were never among the first skills taught. Instead, they followed community building, training in social mores, physical movement, and breathing (nervous system regulation). Yoga Calm respects and follows that tradition.

Simply, with that foundation, kids feel safe and are regulated and ready to begin meditative mindfulness practices.

Just as important, in our view, is not relying on cognitive mindfulness only but somatic, as well – mindful movement. This is especially important for students with trauma or existing mental health issues that can make “being in your head” a scary or unpleasant place to be.

More, as trauma expert Bessel van der Kolk has shown, where there’s a history of trauma,

the practice of mindfulness can become physically intolerable. The physical sensations experienced as the mind turns to focus on itself are overwhelming; to a point where intense agitation and physical pain or illness occur. For others with PTSD, the experience of physical discomfort has meant that they have learnt to dissociate themselves from feeling anything at all. The benefits of mindfulness then become inaccessible.

Somatic approaches, on the other hand – particularly those with repetitive, rhythmic, somatosensory movements such as yoga or TRE – make those benefits more accessible. By releasing the physiologically-bound stress through mindful movement, cognitive approaches may be much more effective.

In the UK research project, there was one other group who benefitted from the training, beyond the roughly 20% of students who did practice mindfulness at home: teachers.

The study found that teachers who participated in the training had significantly lower rates of burnout than those who didn’t. Mindfulness training was also found to improve the overall school climate, at least in the short term. 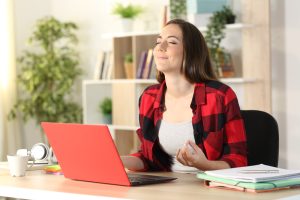 We’ve heard and seen much the same thing in teachers who have trained in Yoga Calm and put it to use in their own classrooms. This is especially so for those who have gone on to become certified, gaining the deepest, broadest understanding of it, integrating its mindful movement into their own daily lives in the very same way we encourage students to do.

And right now, we’re offering a back-to-school special to support teachers in their return to the classroom. Just use the code SPECIAL100 at checkout, and you’ll receive a $100 discount on our online certification bundle.

It’s an on-demand course, so you can start at any time you choose and proceed at any pace you choose. You’ll find all the course details here and answers to frequently asked questions here.

What to Make of the Mindfulness Backlash?