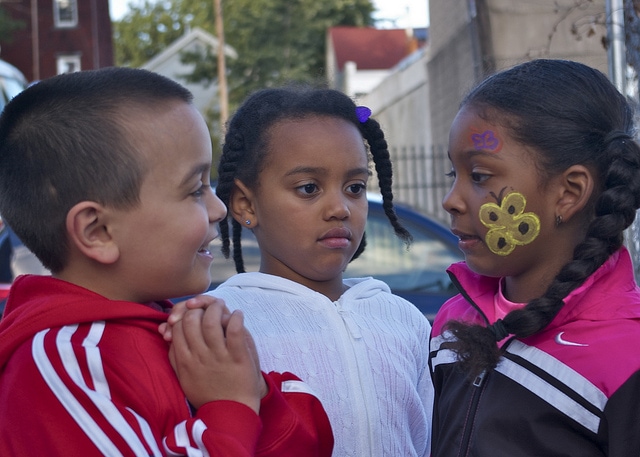 Since last week’s Democratic Debate, so much attention has been paid to “winners” and “losers” and moments such as Kamala Harris’ rebuttal to Joe Biden, a rather important moment has gone overlooked.

It came on the first night, after the topic shifted to the matter of school shootings, when Tim Ryan articulated something beyond mentions of active shooter drills and gun reform:

These kids are traumatized. I support all the gun re—reforms here. We need to start dealing with the trauma that our kids have. We need trauma based care in—in every school. We need social and emotional learning in every school. Ninety percent of the shooters who do school shootings come from the school they’re in and 73 percent of them feel shamed, traumatized, or bullied. We need to make sure that these kids feel connected to the school. That means a mental health counselor in every single school in the United States. We need to start playing offense. If our kids are so traumatized that they’re getting a gun and going into our schools, we’re doing something wrong, too.

It was welcome and refreshing to hear this idea articulated in such a high profile setting! We believe it’s an approach that gets us to dealing with more of the root causes of all manner of dysfunction that can arise when kids in crisis lack resources, support, and tools for coping and creating positive change alike.

Who Benefits from SEL? Everyone! 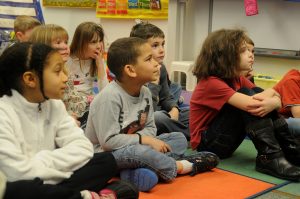 Research shows that long-term benefits come from including social-emotional learning in the curriculum, including academic achievement and positive life outcomes.

More, it contributes to health and wellness into adulthood. Society as a whole benefits, as well. As a 2017 report from Penn State put it,

Learned early, SE skills can help children overcome challenges and avoid unhealthy behavior, improving a variety of outcomes into adulthood. Studies show that good SE skills can lead to better education, employment, and physical and mental health, and to fewer problems with substance abuse, antisocial behavior, or relationships. The benefits SE skills bring to individuals ultimately can have significant economic impacts too, for both individuals and society overall. SE skills help children successfully navigate the learning environment, making it more likely they will graduate from both high school and college. With a higher education, people are more likely to get jobs, and jobs with higher salaries, benefitting individuals and society. Good SE skills also help people lead healthy lives and avoid risky behavior that could contribute to physical and mental health problems, substance abuse, delinquency, and crime. SE skills are vital throughout the lifespan and efforts to enhance skills in children can curtail many social problems before they develop.

The summary goes on to note that there’s a proven $11 return on every dollar invested in social-emotional learning. That’s a pretty good ROI, if you ask us.

The Ethical Foundation of SEL

At its heart, social-emotional learning is about the collective – the communities, big and small, in which we dwell. It involves our relationships to each other. And as a new paper from the American Enterprise Institute reminds, it involves ethics, as well.

At its heart, it argues, SEL is character education, “deeply enmeshed in moral and religious precepts” that date back to Ancient Greece.

While this aspect of SEL is sometimes lost in the understandable – and often necessary – move to ensure secular education in the public school setting, it’s important to note that morality and ethics are not bound to “religious precepts.” They can be just as rooted in social agreements on which behaviors that support and sustain our communities and which have the potential to disrupt our bonds.

Social-emotional learning necessarily involves learning about those agreements. It’s a foundation for pro-social action – just as, in the yogic traditions, mindfulness and yoga poses, for instance, are more than just feel-good “tricks” or a path to physical fitness. Traditionally, they’re preparation for “right action.”

We’re thrilled to see the burgeoning interest in SEL programs. For decades, school counselors like Lynea have been emphasizing the need for schools to prioritize development of these skills.

But the first programs were predominately lecture-based and not, Lynea found, all that effective – especially for special needs and traumatized populations. That was the impetus toward her blending SEL with physical yoga poses and other highly experiential processes. 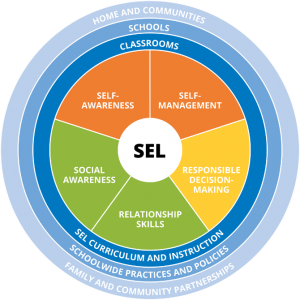 Supported by decades of research into physical fitness and sports education, the physical poses and movement sequences of Yoga Calm develop a physical sense of self, tangible self-confidence, and self-efficacy that supports all other domains, as well as trauma recovery.

Student leadership is integral, as we include community-building processes and class feedback on each other’s measurable improvements. The combination of mindful movement with supportive feedback in a safe community context helps students recognize their strengths and builds self-esteem and intrinsic motivation.

Embodiment of the cognitive and emotional skills sticks, making the social-emotional instruction that much more effective – and giving children a solid foundation for a lifetime of health and wellness.

Emotions Are Central to Learning

No Snowflakes: Youth Leadership in Action