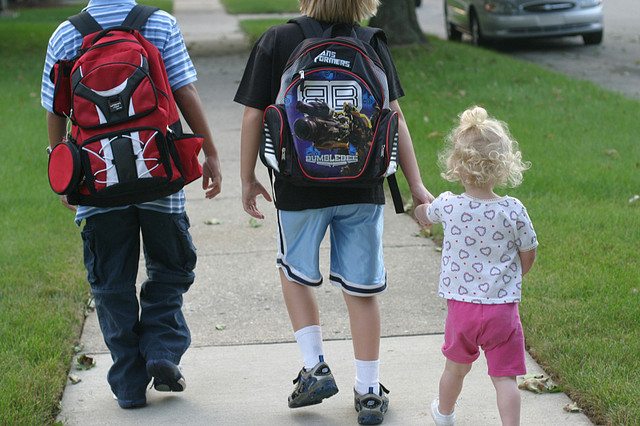 Those of us old enough to remember the original Mickey Mouse Club can recall that while Jiminy Cricket warned us about a whole lot of things – “I’m No Fool, no siree!” – “stranger danger” was never one of them.

My, how things have changed!

“Why Won’t You Let Your Son Walk to School?” 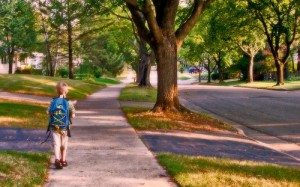 Recently, a parent commented to Lynea that her fifth grade son wanted to walk to school by himself. “He wants to,” she said, “and I won’t let him.” She then admitted that when she was even younger than her son, she walked a mile to school each day, tending to a younger sibling in the process.

Lynea was curious. “Why don’t you allow your son to walk to school?”

The parent stopped, thought for a moment, then said. “I don’t know. I guess it’s because I’m worried about him, and none of the other children walk to school.”

Why are we so afraid? Some may be due to well-intentioned but overly broad personal safety programs directed at kids, in which all strangers are depicted as bad and danger seems to lurk around every corner.

But much of the responsibility has to rest on the shoulders of the media, with its relentless stream of violent stories and images. Such over-depiction of violence tends to skew our perception. As we noted before, it creates the illusion that the world is more dangerous than it is. In reality, as the title of Lynea’s first book for young children puts it, there are, in fact, good people everywhere.

Certainly, the belief that our world is a mean world – one we should stay inside to avoid – is one of the myriad factors contributing to high rates of childhood obesity and obesity-related illness. And it can have significant ripple effects. As free-range parenting advocate Lenore Skenazy explained to the CBC earlier this year,

The more we talk about it and the more legitimacy we give to the idea that the minute you turn your back on a child in a park they’re going to be lured away by a stranger, the emptier the parks get, there are more children who are sitting inside, the more police are arresting parents who let their children walk home from the park, like the family in Maryland that was recently investigated for negligence for simply letting their kids play outside. It will become a mark of absolute negligence and abuse to let your children go outside ever.

Interfering with the Development of Emotional Intelligence & Other SEL Skills

The overemphasis on “stranger danger” especially has other downsides, as well. As one essayist noted in Newsweek a while back,

Kids who are constantly warned of stranger danger come to see the world as a very threatening, dangerous place. Every interaction puts them at risk.

When the default position becomes that kids should be fearful of everyone, with frequent admonitions to never talk to or trust strangers, that leaves kids with no practical guidance on how to carry normal discourse. And kids are aware of the disconnect: the kid who says hello to a bus driver or asks a store cashier a question knows that he has just broke the “Don’t talk to strangers” rule.

This highlights a fundamental truth: Not only is it impossible to get through a single day without interacting with any strangers whatsoever, it’s not even necessarily desirable. Learning how to engage with all types of people is an important life skill.

Also important is learning that we each rely on a wide community of people – many of them “strangers” we may never really or fully know – to get through our daily lives: to travel from one point to another, to buy groceries or other necessities, to help us solve problems, to run our government… The list goes on.

To teach simple “stranger danger” is to tarnish the very concept of community, as well as to undermine the sense of safety and reliability children need to feel through their youngest years so they can grow into happy, healthy, capable and confident adults.

Shontell, a mother and a certified Yoga Calm Instructor, decided that she and her family didn’t want to “live” in the fear that someone was going to take her son Max away. But she also wanted to keep him safe, so she developed a different strategy.

So when Max reached third grade and said that he wanted to walk the 5 blocks to school on his own, Shontelle started training him on that walk.

She pointed out places on the route where there were tall hedges, and she told him to walk on the other side of the street.

She took him to three neighbors they knew along the way, and they asked if Max could stop by there on the way to school. They agreed. She told her son, if he ever felt in danger in any way, he could go to these houses.

She taught him to scream and make a lot of noise so that if he ever did feel unsafe, he could get help. They practiced making a lot of noise.

Ultimately, Max decided to wait to walk to school. He wasn’t ready. 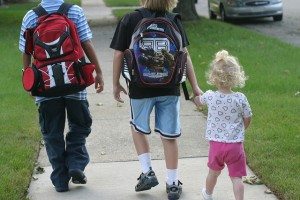 In his fourth grade year, he decided he was. “I got a lot of push back from the other parents,” Shontell remembers. But she knew that she had prepared her son. “He knows how to take care of himself,” she said.

If we’re are going to be able to allow our children to be more free, we will need to train them to have the skills that accompany this freedom.

Shontell is a Certified Yoga Calm Instructor and teaches Life Skills classes to children in her Portland, Oregon neighborhood.