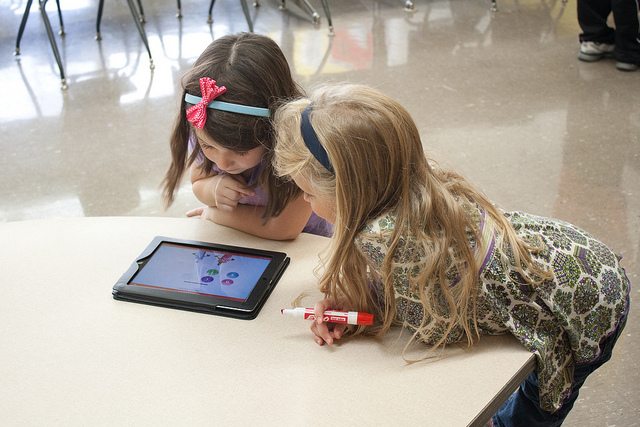 It’s easy – and tempting! – to think that technology can solve all of our problems and challenges. But some fascinating research to be presented at this month’s Annual Conference of the International Communication Association provides a good reminder that tech alone isn’t enough. 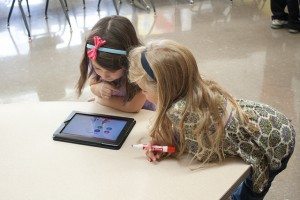 The study was beautifully simple, conducted among kindergarteners in Midwestern elementary schools where iPads were being introduced. At one school, every student was given a device, and at another, none were. At a third, students shared the devices.

All classes were similar in terms demographics, teacher-student interactions and achievement levels. All those who had access used similar educational apps and games.

At the end of the study period, the researchers looked at the student’s year-end test scores. The students who had shared iPads scored about 30 points higher than students in either of the other classes. The improvement was on par with that spurred by other interventions, such as homework.

This was not what the researcher expected.

“I went in thinking one-to-one would have been better than shared iPads,” said study researcher Courtney Blackwell, a doctoral student at Northwestern University’s Center on Media and Human Development.

As for why sharing iPads might improve learning, the researchers suspect it has to do with the boost in social interaction, which is important for development in young children.

“I think when they had to share the iPads it was encouraging those social interactions. There was more talk about what they were doing on the iPads,” said Blackwell, who also observed the children in the classrooms.

The study seems to nicely underscore how social-emotional learning (SEL) is far from being something “extra” to a curriculum. Just like physical activity, it has a role to play in academic achievement. When it comes to learning outcomes, we continue to see that social is better than solo – with or without the help of technology.

But it also offers an important reminder that technology is not the bad guy. It’s value – or harm – depends on how it is used.

It’s easy to miss this when everywhere you look, you can find evidence of the tendency to overuse tech and overindulge in entertainment media. For instance, according to research presented recently at the Pediatric Academic Societies meeting in San Diego, even just one hour a day of TV considerably raises the risk of obesity (and thus, we may safely assume, all the problems that can go along with that).

The American Academy of Pediatrics recommends no more than one or two hours of entertainment-based screen time each day for children and teens, “and that should be high-quality content.” They recommend no screen time at all for children under the age of 2.

Of course, it can be tough to cut back on media consumption. The screen remains a handy babysitter. We all know kids who can’t be unplugged without feeling utterly, utterly bored. Of course, when you’ve not been nurturing your imagination and creative spirit, engaged mainly in virtual interactions instead of face-to-face, it can be hard to come up with something to do.

Fortunately, it’s a lot easier to wean from screens when others are doing it, as well – as is happening this Screen-Free Week, which begins today. A project of the Campaign for a Commercial-Free Childhood, this international celebration encourages children, families, schools and communities to refuse the distraction and separation our screens so readily provide. It’s a time for people to come together and do the things that help children build good relationships and social skills, problem solve and creatively imagine, learn through play and human interaction – things that media and tech’s easy allure can distract us from.

Folks around the country have planned community events for this week. You can find out what’s happening where you live with the event’s search tool. (And if you’ve planned something yourself, you can add your event, as well.)

Here are some more resources with tips and ideas for things you and your children can do this week instead of staying glued to screens:

And be sure to see our previous posts on kids, technology and media consumption: