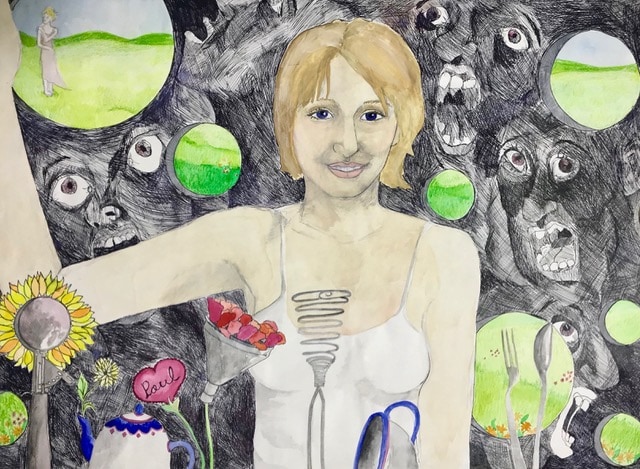 After trauma, it’s not just the brain that remembers. The body remembers, too. One thing that makes it even tougher on both is that trauma is often entwined with shame.

We internalize the notion that we’re not supposed to talk about what happened to us. We believe we’re supposed to let the past stay in the past and look happy at all costs.

There are other motives for silence, as well. There can also be fears of judgment or being seen as “damaged” in some way, not worth caring about. We may fear being misunderstood.

Yet giving voice to experience is a vital part of releasing trauma from the mind and body. It’s a way of saying, “This really happened. This was real.” It’s a way of making sense of what happened and how that’s affected us. It’s a way of processing emotions and, in a way, creating order out of disorder.

Of course, “voice” is much more than just words we speak or sign or write. It’s any expression of interior life – painting, music, sculpture, dance, or any other form of art.

Art was a crucial way of finding voice for Manda Bryn Severin, who you may already know from our new Empower program of brain science and mindful movement activities. A former instructor of psychology at Southern Oregon University, today, she is a fine musician and painter.

As long as she can remember, Manda loved making art. As she grew older, though, it also became an important means of escape from her father’s psychological abuse, just the latest manifestation of trauma that bound her to previous generations of women in her family.

Drawing and painting created a space in which she could experience some peace.

At the same time, though, this became a space in which she could ultimately define herself. “My father always told me I was evil, I was bad. In my art, I could say, ‘This is me. I’m not who my father says I am.’”

But here, let Manda tell you more about it:

Manda was also kind enough to share more of her reflections on some of her early artworks in particular to show even more how the work gave her voice when all around expected silence:

Here, I’ve drawn myself looking calm and happy, but if you look at my eyes, you will see it’s a fake smile. I was hiding the chaos of my home life with my calm demeanor, and hiding my internal chaos (anxiety and depression) as well. Still, I was trying to give the viewer a glimpse of my internal world as depicted in the background. I drew these agonized faces with my left hand to symbolize how out of control I felt trapped inside my life situation. Yet through the gaps, you see a serene prairie with a second image of myself in the distance. That’s the hope I had that life existed for me beyond the misery of my present circumstances. The objects that surround me in the foreground symbolized my hopes and desires to someday have a stable home and nurturing family. I believed in a future when I would have the freedom to make my own choices and live a life free of bullying and toxicity. 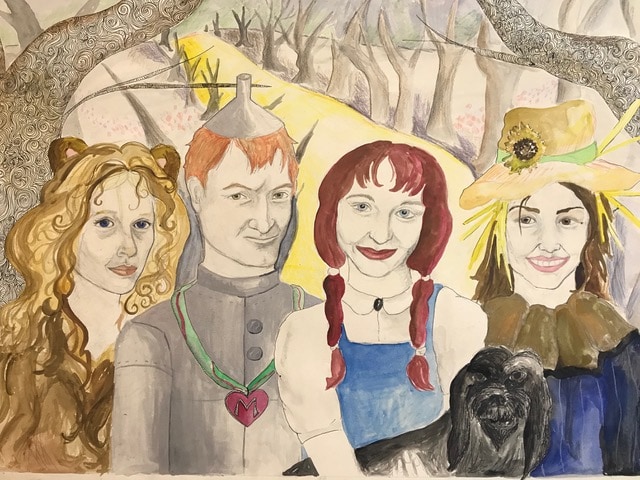 At 17, I drew this portrait to commemorate the end of our school year. I’m in the lion costume, accompanied by my boyfriend, my two best friends, and my dog. The four of us had been through a lot that year, and I used the Oz characters to express our life experiences and lessons learned. I chose the lion for myself because I’d begun to gain courage in standing up to my father. In the trees that frame the picture, I created a bark pattern where I could disguise words and record my own history, free from the judgment of others. 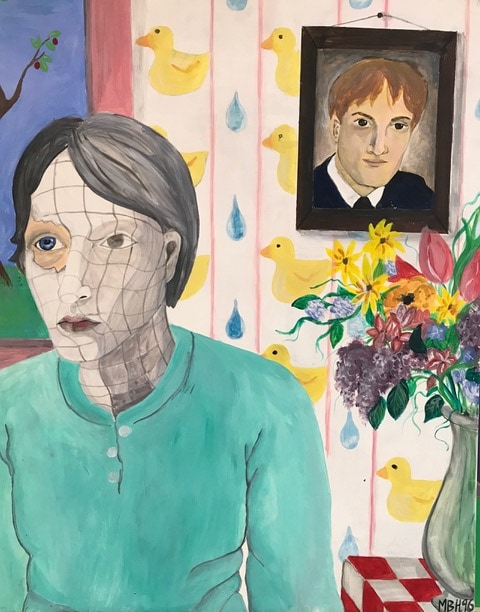 This portrait from the same year depicts the relationship I had with anxiety, depression, and the feeling of being paralyzed. My boyfriend, pictured behind me, had become psychologically abusive. I was trying to express my feeling of being unable to break myself free from our toxic cycle of psychologically abusive romantic misery. The wallpaper pattern recalls a pet duck I had as a child, which represented for me feeling of pure and unconditional love. However, I lined the ducks with tears because I realized I had recreated my relationship with my abusive father in my current romantic relationship. Though I recognized the pattern, I was still unable to leave the relationship for another year and half. 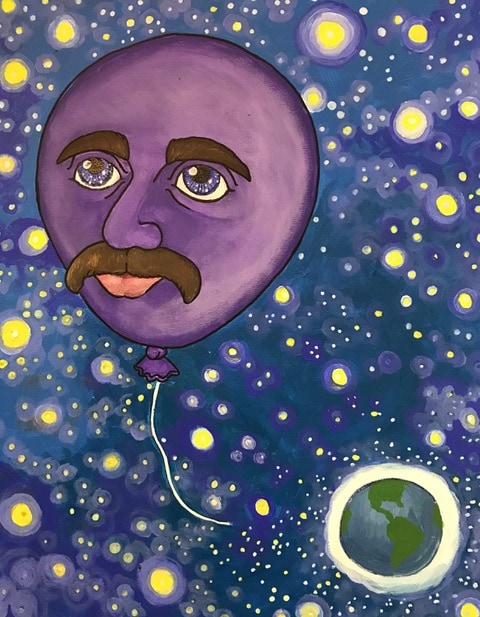 Even after I’d cut off all contact with my father, his cruel judgments and harsh words continued to play in my head, torturing me. So I painted this image to give myself a visual mantra of sorts. When his words would resound in my mind, I’d picture his head this way: a harmless purple balloon floating further and further away with each passing second, his energy fading and fading, withdrawing from me almost entirely with time.

Even to this day, says Manda, “art helps navigate the difficult things.”

It can help those on the outside, too – inspiring others to share their own creative expression, reminding them that they’re not alone, that there are others who have successfully navigated some of the hardest of life’s challenges, that someone else understands.

Speaking for Our Selves

Perhaps especially among teens, the desire to be understood is strong and the sense of being misunderstood, great. Voice – and the agency that goes along with it – is a powerful tool in this dynamic.

One thing we often hear in one of the trauma groups for girls that Lynea leads is how often they perceive that their feelings, concerns, desires, and so on weren’t truly grasped by the adults who want to help them. They express a sense of being denied voice in their own lives.

Yet because of this, they can offer real insights to working with trauma – or other mental health issues – more effectively with youth.

So over the coming months, we’ll be giving them space in this blog to share their experiences of trauma and its effect on their mental health and well-being. They’ll share what they wish therapists and other adults would understand, what they’ve found helpful and harmful on their journey and what they need in terms of social support to succeed in their pursuit.

We look forward to hearing from them. Their voices are good.

It’s Time to Address the Root Causes of School Shootings