“Sing, Sing a Song…” The Power of Music’s Message 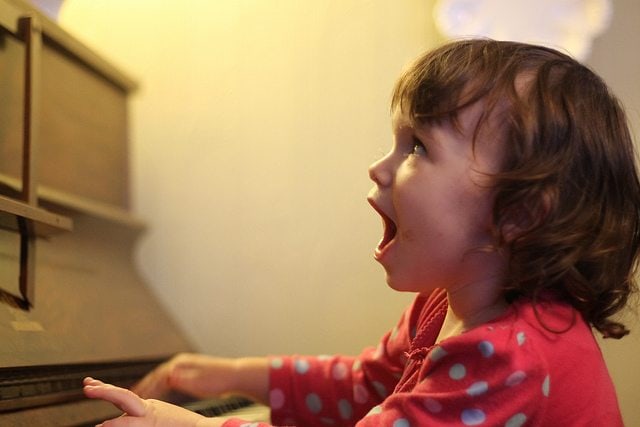 One day when our granddaughter Anna was feeling sick with a cold, she sang a little song that went like this. “When you’re sick, rest is best, rest is best.”

She told us that if she rested, she would get well faster.

Then came other songs – one about being a big help in your family, another about what to do when you’re angry. “Where are you learning these songs, Anna?” I asked her.

“From Daniel Tiger,” she said.

Curious, I looked up the cartoon and was delighted to find out they were using the same songs Fred Rogers wrote for Mr. Rogers Neighborhood. His legacy lives on!

Clearly, the producers of Daniel Tiger’s Neighborhood care about the songs children sing. They understand how powerful song can be.

Advertisers know this, too, creating jingles that can stick with us for a lifetime. Double your pleasure, double your fun… You deserve a break today… Like a good neighbor… My baloney has a first name… Meow, meow, meow, meow…

Likewise with TV theme songs. At a party once, a friend started singing the theme to Gilligan’s Island. By just a few words in, all of us were singing along.

Songs stay with us. We find ourselves mentally singing those earworms, even when we’d rather not.

But sometimes they’re helpful – like the gentle reminders Anna was singing as she went through her day. Songs can carry us through difficult times. Sometimes a song can even save a life.

This was the case with the rapper DMC. In a documentary some years ago, he talked about his battles with depression, alcoholism and other problems. He had planned to take his own life. But one day as he was being chauffeured, a particular song came on the radio.

“I’m in the back of the car, and I hear this song by Sarah McLachlan called ‘Angel,’” DMC recounted. “I hear that song, and something in me says, ‘D, it’s good to be alive. Life is good.’ That song saved my life. It kept me from committing suicide.”

Later, he met McLachlan and told her how the song had helped him.

“Thank you for telling me that, Darryl,” she said, “’cause that’s what music is supposed to do.”

A local Portland language arts teacher’s song about bullying“Feel Like Running” demonstrates how kindness can break through cyberbullying. The song is touching hearts around the nation as it points toward a new way of responding to the negative behavior.

Anna and I like to sing on our way to school. Sometimes we listen to CDs; sometimes we make up their own songs. It’s a sweet way to start the day.

Not long after I wrote my new book Little Banty Chicken and the Big Dream, Anna and I were talking about what the story meant to her. From her thoughts, we started to write a song on the way to school one day – a reminder of the power we all have to dream:

It doesn’t require a perfect voice. Sing along to a cheerful song, and you’ll find yourself a little lighter. Or sing yourself and your child a lullaby as you tuck them in at night.

As Daniel the Tiger says, “Good night. Sleep Tight. Dream dreams as sweet as you!”