No Snowflakes: Youth Leadership in Action 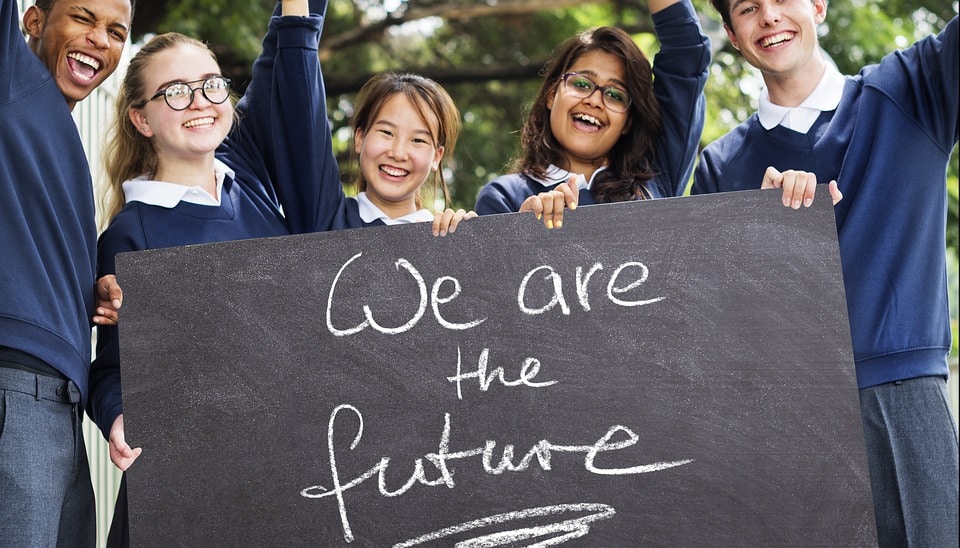 Since Jim is an avid cycling fan, he’s spent the past month following the Tour de France – a race made even more challenging this year by a brutal heat wave, hazardous weather, and landslides that forced a change in course.

With such conditions, you might think that older, more experienced cyclists would have the advantage. But no, the Tour was won by the youngest man in more than a century: 22-year old Egan Bernal.

As his teammate Geraint Thomas told the BBC, “Egan is the future and when I’m 45 and old and fat and sat in the pub watching him win a 10th Tour de France I can say I told him all I know.”

The Future in Action

Lots of folks today complain about “kids these days,” in the same way countless generations before complained. Young adults today are soft and oversensitive, they say; snowflakes glued to their smartphones and oblivious to the world around them.

Certainly, there are challenges facing youth today that are unique: the pernicious aspects of social media; the threat of school shootings; rising rates of anxiety; the effects of climate change.

Yet in spite of such issues, plenty of young people are doing amazing things, from personal accomplishments like Bernal’s to critical work for social and political change – work often inspired by the Parkland students who channeled their grief toward reducing gun violence.

“I felt everything was meaningless and there was no point going to school if there was no future,” Thunberg says. But this time, rather than suffer the pain, she decided to push back at its cause, channeling her sadness into action. “I promised myself I was going to do everything I could do to make a difference,” she says. 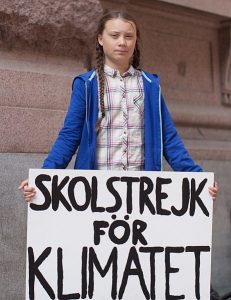 One solo protest outside the Swedish Parliament in Stockholm set Thunberg on a path that would take her to the UN Climate Change Conference, the World Economic Forum at Davos, and even an audience with Pope Francis. Earlier this year, 1.6 million people in 133 countries, inspired by her lead, demonstrated for action on climate change.

Closer to home, we recently witnessed a group of Oregon students successfully press for a new law that now allows excused mental health days in the schools. They saw a need. They took action.

That’s hardly the stuff of “snowflakes.”

The Importance of Nurturing Leadership

In fact, today’s youth often have assets that earlier generations lacked, summed up nicely in a recent opinion piece over at the Guardian:

From increased parental interaction, to a more nuanced understanding of what it means to be both physically and mentally “well”, we are nurturing a more self-aware, compassionate and committed generation that may very well be the foil we need to a stiff-upper-lipped, closed-minded and austerity-soaked culture.

Much of this is happening in the schools, of course, where Yoga Calm and other mindfulness and SEL initiatives are helping kids become more resilient, empathetic, confident, and community-minded. 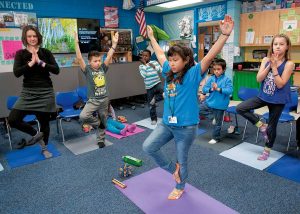 Nurturing those qualities is one reason for the importance of routinely having students themselves lead the activities. For leading is more than just knowing the poses or flow, more than just demonstrating them in front of a group.

Leadership involves reading non-verbal cues and interacting with empathy – seeing where the others are, how they’re doing, if the activity needs to slow down or speed up, if someone needs help. It requires clear communication and self-awareness, as well as awareness of others.

By the invitation to be leaders, students are able to work even more on those skills, skills that can benefit them in any pursuit.

Good leaders can create good changes, even change the world.

But not all leadership has to be grand or global.

One rainy spring day, I was working with a group of first and second graders, including one who’s sister had tragically died at the age of three from an aggressive cancer. Several cousins were in the group, along with other children who had also lost loved ones.

“Can we go see her grave?” some of the kids asked, nodding toward the cemetery behind our school, where she’d been buried. This made me nervous.

“You want to go to her grave?” I asked with a tone that said “no.” Everyone nodded in agreement.

Hoping this would pass, I said, “Let me think about it.” But next week, they asked again.

“No,” I said. “Not today. I need to ask the principal.” This brought them to tears. Clearly, this visit was important to them. So I talked with the principal. Thank goodness he was an understanding person.

“Are you sure you want to do this?” he asked. 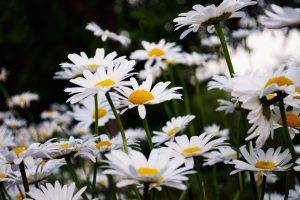 Still, I was afraid – afraid it would be too much for them; that I wouldn’t know what to do once we got there. Still, I let them lead through the low daisies and buttercups that speckled the grass as we walked toward the cemetery.

“Let’s pick flowers for her!” one of the children shouted.

When we arrived at her grave, they sat in a circle around it. They used the flowers to create a beautiful mandala on the grave stone. They worked together so beautifully to make art to honor this child.

Then they sat and talked about her – things they remembered, thoughts of her in heaven with others they loved. They cried. They wondered if their lost loved ones were meeting one another in heaven.

I sat back and watched, amazed by what their taking leadership had unfolded to me.

Did you know we’re celebrating 20 years of Yoga Calm? As part of that celebration, you can save $170 on our Online Certification Bundle, $200 on a school-wide subscription to our EMPOWER program, $79 on Trauma Release Exercise workshops, $20 on our popular Classroom Kit, and $60 of savings on our acclaimed Teaching Yoga to Seniors Certificate course.

Just use the discount code YC20th on any course, product or staff training until August 20, 2019. (Discounts apply to new purchases only and cannot be combined with other discount codes & offers.)

Emotions Are Central to Learning