Where were you during the Great Facebook Outage of 2019?

Thanks to a server configuration change, Facebook – and Instagram and WhatsApp – went down for much of the world one day earlier this month. While some people welcomed the 12-hour outage as “a nice short vacation,” most just went elsewhere for their digital fix.

The web analytics service Chartbeat told Hack overall traffic during the outage was up about 3-5 per cent, despite these websites recording a 15-20 per cent slump in traffic from Facebook.

Yet there are those who scoff at the concept of digital addiction.

How Is Digital Media Affecting Us?

The harder thing to believe is that we could be tethered to our devices as much as we are and there NOT be an effect. Our good friend and colleague Doreen Dodgen-Magee sums up the matter perfectly in a recent essay in the Washington Post:

If Americans were interacting with anything else for 11-plus hours a day, I feel confident we’d be talking more about how that interaction shapes us. Mental-health professionals must begin to educate themselves about the digital pools in which their clients swim and learn about the impact of excessive technology use on human development and functioning.

Indeed, one of the challenges is that we don’t yet know, exactly, how digital media is affecting us – and may not know until more post-Millennials come of age, the first group to grow up with social media and smartphones as the norm. 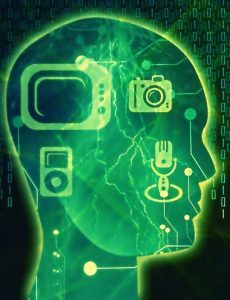 Still, the research that has been done so far is hardly reassuring.

Even more concerning is the impact on children, whose brains are still developing all through adolescence and into early adulthood. Late last year, initial results from a large MRI study being conducted by the National Institutes of Health showed that kids who “spent more than two hours per day on screens scored lower on language and thinking tests.”

Alarmingly, kids who spent more than seven hours per day on electronic devices showed premature thinning of the cortex, which Dr. Gaya Dowling of the National Institutes of Health described as a “maturational process” that typically happens later in development.

“Our Attention Is Being Captured…”

One of the biggest practical concerns is how attachment to our devices encourages ever greater distractibility. As neuroscientist Richard Davidson explained to Vox,

Our attention is being captured by devices rather than being voluntarily regulated. We are like a sailor without a rudder on the ocean — pushed and pulled by the digital stimuli to which we are exposed rather than by the intentional direction of our own mind.

The ability to voluntarily regulate attention is more developed in humans than other species. As William James, the great psychologist, wrote in 1890, “The faculty of voluntarily bringing back a wandering attention, over and over again, is the very root of judgment, character, and will.”

But we are becoming impaired in that capacity, globally. We’re all pawns in a grand experiment to be manipulated by digital stimuli to which no one has given explicit consent. This is happening insidiously under the radar.

This, to me, underscores the urgency of training our minds with meditation so we don’t have to check our phone 80 times a day.

Mindful movement likewise helps develop and strengthen our ability to self-regulate. In fact, in some ways, it may be even more helpful in that we are designed to move. Physical activity and the brain are intimately connected, as research continues to show.

As we learn mindfulness, we learn that we can live deliberately, choosing how we live each moment instead of submitting to impulse and chance, instead of being captured. 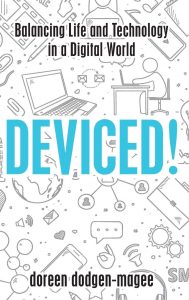 None of this is to say that all screen time is bad, nor all technology. There are positive uses, as well. One of the keys, says Doreen in her new book Deviced!: Balancing Life and Technology in a Digital World, is to prioritize quality over quantity.

There is, after all, a qualitative difference between using a tablet so you and your children can spend time in video chat with grandparents who live far away and simply killing time by endlessly scrolling through your Instagram, Facebook, or Twitter feed; between learning new skills or new subjects via video or apps and playing Fortnite or Minecraft for hours on end.

Some uses of technology can feed us; others can starve us. It’s up to us to make wise choices – and to model the behavior we want to see in our children.

We can also strive to create opportunities for activities that digital life can’t replace: face-to-face interaction, unstructured play or recreation, sharing activities – from cooking to sports to travel (both close to home and beyond) and more – together, in real time, in real not virtual life.

These are the kinds of activities through which children best learn the social-emotional skills that instill resilience and prepare them for life as adults. They are learned through authentic human connection.

Even if Doreen weren’t our friend, we would still strongly recommend her book, which you can read an excerpt of here, which includes some very helpful tips for managing screen time. We encourage you to check it out.