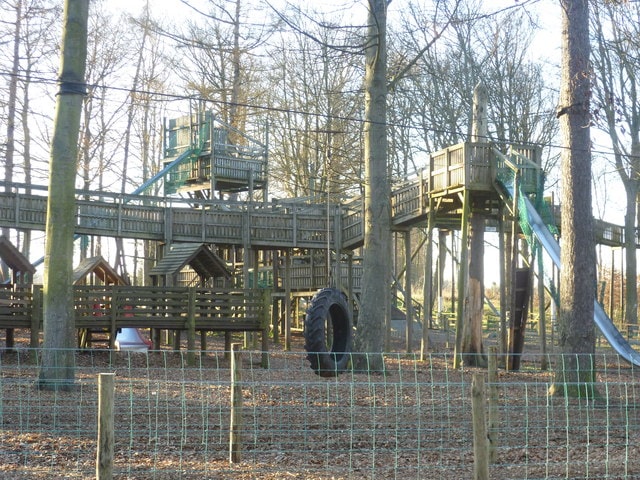 Think of Monterey, California, and you may think of its spectacular aquarium or Cannery Row or its rocky, cypress peppered shoreline, the squeal of sea otters and bark of the sea lions sounding over the crashing surf. 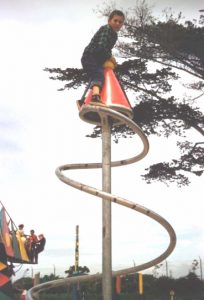 My parents took me all the time…. We’d have birthdays there. It was a treat, like a personal amusement park. There were quite a few places where you really could hurt yourself too. There was an element of danger. I kind of respect my parents just for taking me and letting me figure out the physics of it all.

These days, much of the risky fun has been removed from the park. The “helicopter” – a tall and colorful steel structure that spun around quickly, sometimes tossing off a dangling kid or two in the process – is gone. The old steam engine remains, but kids are no longer allowed to climb on it, let alone scrabble along top the boiler to ring the train’s bell.

And this is a shame, adds Annereau.

There’s an element of learning for kids to understand their limits and a responsibility for parents to make sure the kids are okay while still giving them that freedom to learn.

Today, parents tend to be both more involved in their children’s lives and more protective. The shift is understandable. 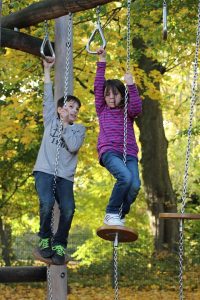 As real world social ties have frayed, for instance, there’s seldom a neighborhood looking out for all of its kids – and the nature of neighborhoods has changed so that there may not be safe or accessible places to play outside. A good many parents strive to give their children advantages through extra classes, lessons, sports, and other extracurricular activities that can fill out an academic resume. And though statistics – and lived experience – tell us that violence is rare, our media environment incessantly tells us otherwise, keeping us in a perpetual state of fear.

We’ve blogged about these and related issues before.

And we’ve also noted that free, even rough-and-tumble play is critical for a child’s healthy development – physical, cognitive, and emotional alike. It provides time outside and much needed physical activity. It nurtures self-regulation, as well as “soft skills” like creativity and imagination. Playing with others also offers important opportunities to work on social-emotional skills such as reading social cues and negotiating conflict.

And it helps them conquer fear and develop a sense of mastery.

As Ellen Sandseter noted in a 2011 study in Evolutionary Psychology, kids have a sensory need to confront danger – or at least feel as though they’re confronting it.

Risky play is a set of motivated behaviors that both provide the child with an exhilarating positive emotion and expose the child to the stimuli they previously have feared. As the child’s coping skills improve, these situations and stimuli may be mastered and no longer be feared. Thus fear caused by maturational and age relevant natural inhibition is reduced as the child experiences a motivating thrilling activation, while learning to master age adequate challenges. It is concluded that risky play may have evolved due to this anti-phobic effect in normal child development, and it is suggested that we may observe an increased neuroticism or psychopathology in society if children are hindered from partaking in age adequate risky play. 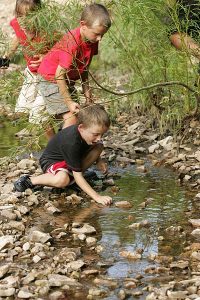 Indeed, as more educators, psychologists, policymakers, and other realize just what may be lost when children are denied opportunities for autonomous play and exploration, the tides seem to be turning. Just last week, Utah’s governor signed a bill redefining “neglect” so that kids can take part in such unsupervised activities without their parents risking punishment for it.

“Kids need to wonder about the world, explore and play in it, and by doing so learn the skills of self-reliance and problem-solving they’ll need as adults,” Sen. Lincoln Fillmore, a sponsor of the bill, said in a statement to ABC News. “As a society, we’ve become too hyper about ‘protecting’ kids and then end up sheltering them from the experiences that we took for granted as we were kids. I sponsored SB65 so that parents wouldn’t be punished for letting their kids experience childhood.”

Fillmore added that there were no organized groups against the bill, and it passed unanimously out of both houses of the state’s legislature.

Back to the Future

Meanwhile, in Great Britain and elsewhere in Europe, people are starting to convert older “safe” playgrounds into outdoor play spaces where kids can have fun taking risks within a controlled environment. There are climbing towers, tall grasses, boulders, mud pits, and more – wilder spaces in which a child is free to explore, discover, and engage in imaginative play.

Some have even noted that this shift is more suited to our modern socio-economic landscape. In the past, notes a teacher in a recent New York Times feature, life was geared toward rule-following.

But rule followers are unlikely to be rewarded in the future, said Ms. Hughes, whose twin 19-year-old children have just entered the work force. As she thought through these changes, a towheaded kindergartner nearby had fashioned a catapult, stacking seven bricks on one end of a wooden plank and jumping solidly onto the other end, sending the bricks flying into the air, over the heads of his playmates.

“You’ve got to get out there and find your position in the world,” Ms. Hughes said. “If you don’t give those children those creative skills, that risk, that take a chance. If they don’t have all that risk out there when the child is four, the adult isn’t going to do that.”